This tutorial is written by Eunan Hendron.

For this tutorial we will produce a big batch of Cobblers wax. You will need Bee’s wax and rosin, both in 1lb bags, and some olive oil. Rosin is a translucent amber-coloured to almost black brittle friable resin that is obtained from the oleoresin or deadwood of pine trees or from tall oil. It is commonly used to increase sliding friction, as on the bows of certain stringed instruments, and to manufacture a wide variety of products including varnishes, inks, linoleum, adhesives and soldering compounds. The rosin gives the Cobblers wax it’s tackiness. It is sold in small, crystalline cakes. You can shatter these with a hammer, hard as they are.

The ratio of Rosin : Wax : Oil that is applied in this particular tutorial, is 6.75 : 2.25 : 1. More rosin makes the wax harder and more tacky, more Bee’s wax makes it softer, but less tacky. In times of old, ‘summer wax’ was harder, and ‘winter wax’ was softer, for obvious reasons: no great source of heat in the winter.

Mixing rosin and Bee’s wax together will provide a hard wax that is very sticky in it’s liquid form. To be able to use this wax at room temperature, it is necessary to add a little olive oil.

Use precautions if you decide to give this a try. You will be working with highly flammable chemicals and if you get them on your skin, they will burn you… 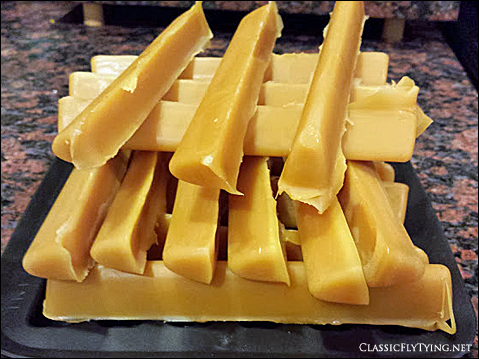 The ingredients: Bee’s wax and rosin, both in 1lb bags and ordinary olive oil. 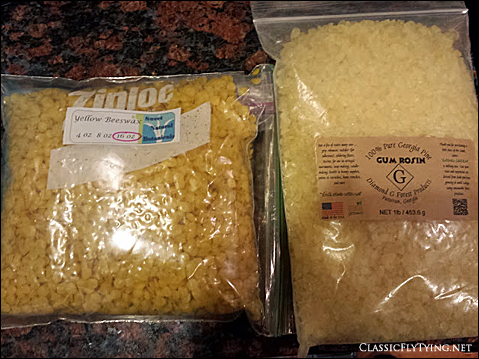 You’ll need a kitchen scale for accuracy. For 500g total of wax rosin and oil, the above mentioned ratio will translate to 337.5gr rosin, 112.5gr Bee’s wax and 50ml olive oil (1g = 1ml at a close approximation for oil). 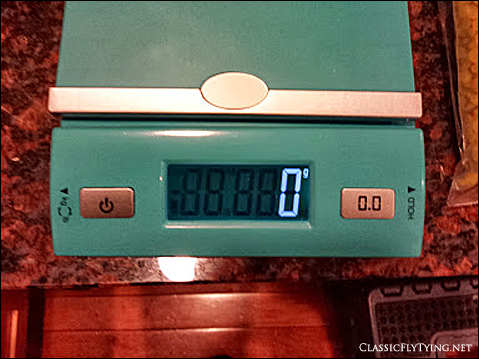 The author recommends heating the ingredients of the Cobblers wax in a pan, directly over a flame. It is important to realize that rosin is a highly flammable substance, so if you have a try at this, you should proceed with caution. The safest way to melt and mix the ingredients, is in a double-boiler pan or just a pan over hot water.

Add the Bee’s wax to a pan. Mind, after this you’ll never use this pan for food anymore. 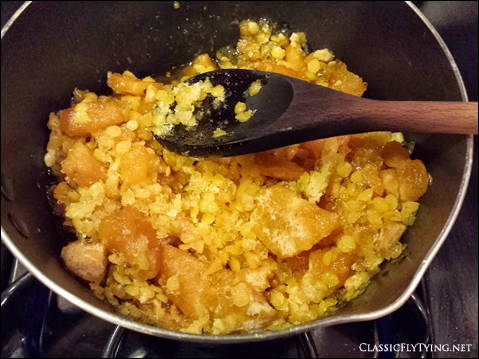 Melt the wax patiently at a very low heat. 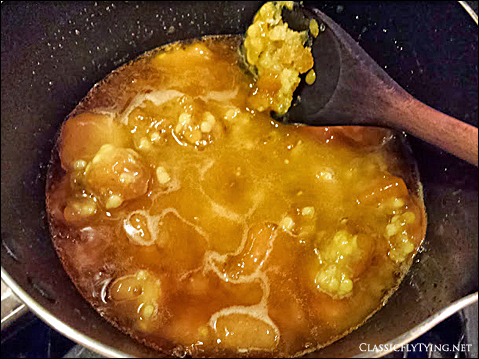 Add the rosin when the wax is properly melted. Make sure there are no lumps and keep the mixture on a low heat. Over-heating will cause the mix to darken a little. Heat the ingredients enough to thoroughly mix them, but no more.

Keep in mind that rosin is highly flammable, so you have to proceed with caution. 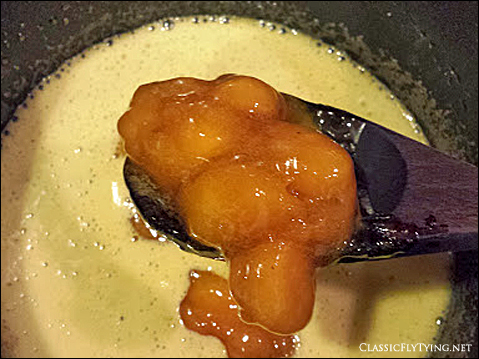 When the mixture is smooth, add the some oil. A few drops too much oil will cause the wax to lose it’s tackiness, so if you mistakenly added too much oil, you can balance this by adding a few more rosin crystals. 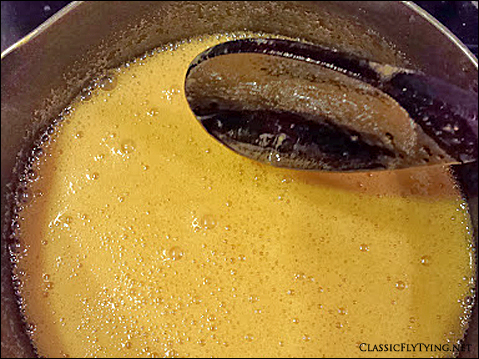 Pre chill your molds in the freezer. The ones that are used here, are from Ikea and cost about $1 each. Silicone molds are the easiest. They allow the wax to be easily removed once it solidifies.

The use of foil under the trays prevents an occurrence of wrath from the lady of the house, although wax residue can easily be removed. If you ever choose to dye in the kitchen, then you do so at your own risk!! 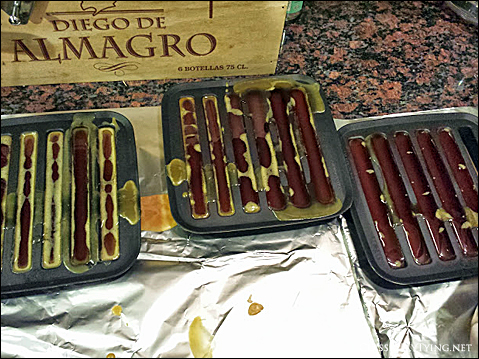 The hardened wax sticks. The over spill on the sides can be collected and remelted next time, or used immediately. 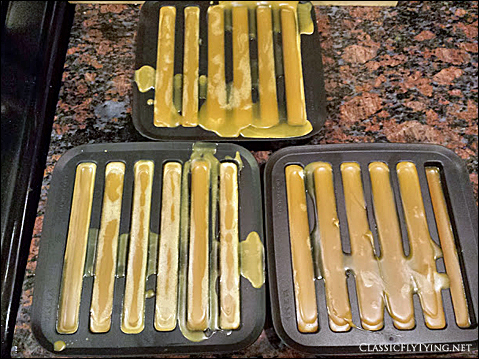 Easily removed from the mold. 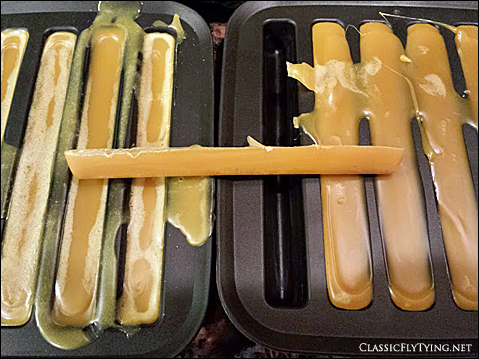 A little bit on your finger as you’re tying works wonders for holding materials in place with minimum thread wraps, and your body temperature keeps it soft enough to run over the thread as you need it. 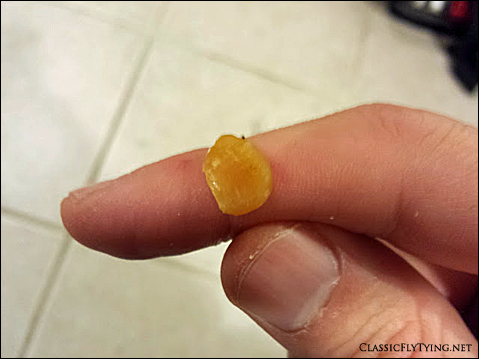 Eunan Hendron started tying flies around the age of 12 to participate in the still water winter competition on Lough Cowey, Northern Ireland, with his father. Over the period of 2012 and 2013, his focus shifted to classic style flies – winged wet flies, Rangeley (Maine) Style streamers and Atlantic salmon flies.

“It’s been an interesting journey through the classics, and now the vast majority of my flies are from Bergman, Malone, Saracen, Stevens, Kelson, Pryce-Tannatt, Ephemera, Hardy, Tolfrey, amongst many others. I still tie flies for fishing and with my adventure into classics, my general tying has improved immensely. I highly recommend any fly tier to have a try at classic style flies, you will no doubt see the improvement I’ve seen”.

Originally from Craigavon, Northern Ireland, Eunan now lives in Philadelphia. Some of his streamer flies have been featured on the Streamers365 project and he has tied flies at the International Fly Tying Symposium, Somerset NJ as well as some other local expos.