It has frequently been said that William Blacker did his best to confuse his readers about how to tie salmon flies and that one of his aims was to make sure that people had to come to him to buy them—but this is the kind of thing that is only said by people who have never studied the 1843 edition and have no experience of tying flies in the hand.

Contrary to what you might hear, the entire purpose of Blacker’s book was to teach his readers how to tie salmon flies and that was the main reason why the 1855 edition stayed in print for very nearly 40 years. One measure of this is that the famous fly tyer David Foster was incredulous when someone suggested that Blacker’s instructions weren’t adequate, but another is that Blacker wouldn’t have written the many thousands of words he did about how to tie flies if he was intending to confuse folk—he would never have put pen to paper at all. 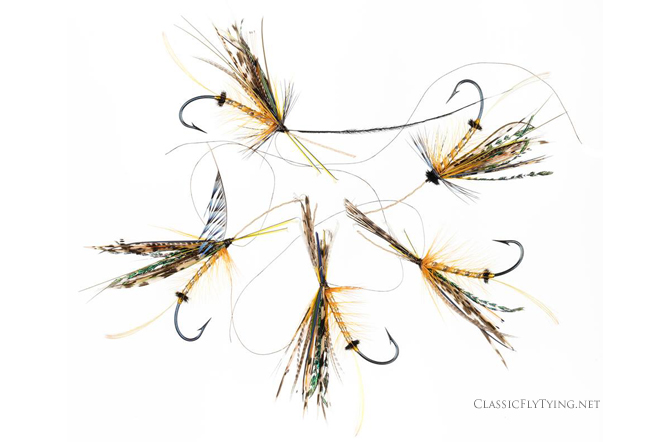 The 1843 edition of Blacker’s book contains 14 different methods of tying a fly, along with plates illustrating some of the techniques, and (depending on which binding you bought), various leaves with partially dressed flies. These tipped-in flies illustrate various points in Blacker’s tying instructions and he helpfully wrote in the page number the patterns related to at the top of each page. Trying to confuse people? We don’t think so.

The reason why many modern authors have had trouble getting their heads around Blacker’s instructions is that Blacker wasn’t writing for people who tied with a vice. This is why, for example, he gives the material for the wing first—because if you tie a fly in the hand, professionally, you had better lay out the wing materials first for efficiency’s sake. If you are an amateur, it doesn’t really matter what order you do things in, but Blacker was writing about how he did things, and he tied thousands of flies every year, not a few dozen. The other problem with interpreting Blacker’s tying instructions is that in the 1840s and 1850s, there were no agreed terms for parts of the salmon fly like the butt and the tag, so Blacker used different terms to the later writers.

To get around this situation, the book (which goes to the publisher next week) has modern dressing instructions for every 1842 and 1843 Blacker pattern, and we have also put all of his fly dressing instructions into modern English, and even thrown in some step by step shoots, like this one, showing how to tie in an Irish style mixed wing, all the flies (as usual), by Alberto Calzolari