Blacker has regularly been accused of publishing deliberately confusing fly tying instructions and it has to be said that he doesn’t do himself any favours, but one of the things that must be said in his defence is that when he published the 1843 edition there were barely 50 detailed salmon fly patterns in print. There was hardly anything written on the subject in the early 1840s, and Blacker was pioneering the art of describing how to tie complex patterns—which he did so well that his 1855 edition didn’t go out of print until 1892, when Hale’s book was published. That is the most phenomenal run for what was basically the first set of instructions on how to tie a mixed wing. 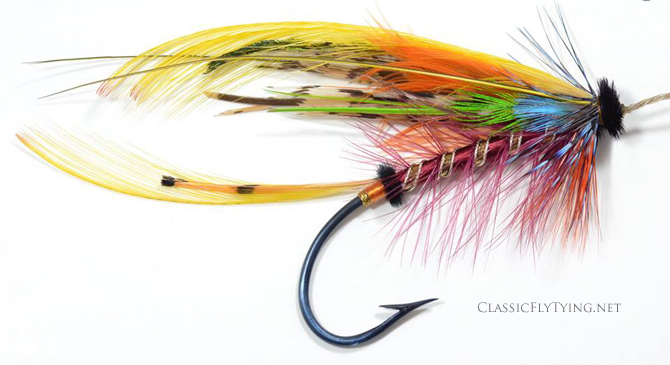 We have put a deal of space aside in the book to look at this aspect of Blacker’s writing—he wasn’t called ‘the Professor of Dean Street’ for nothing’, because modern authors have a strong tendency to read Taverner and Francis’ comments about Blacker and take them as gospel. The problem here is that Taverner admitted that he had never seen the 1842 or 1843 editions and that he followed Francis and dumped on Blacker’s 1855 ‘easy method’, which Blacker made very clear was intended to get students up and running with a fly that would catch fish, and not for tying prize winners. Francis can’t have read the 1855 particularly closely either, because he wrote that Blacker’s instructions for tying a gaudy fly were the briefest of all, which was not only untrue, but ignores the fact that Blacker actually wrote 200 words more than Francis did on the subject!

Francis was a great writer, though, and one of the places where he was correct about Blacker was when he wrote that many of Blacker’s dressings ‘…appear to me not only puzzling but almost impracticable’. When Francis penned those words, he was forgetting that Blacker was blazing the trail when it came down to describing salmon fly dressings, and that he, Francis, was one of Blacker’s beneficiaries. If Blacker hadn’t been prepared to put his head on the block and make some mistakes, then Francis’s generation would have had to do the donkey work instead.

What this means for you and I is that when we sit down and read one of Blacker’s dressings, we need to remember that terms have been taken for granted for a hundred years didn’t have the same meaning in the 1840s and that the ‘tip, tag, tail, butt, body…’ style of instructions couldn’t be written, because the terms tag and butt hadn’t been defined then. So tying a Blacker pattern involves getting into another place, and remembering above all else, that we aren’t in Kansas any more.

We have spent the best part of a decade deciphering Blacker’s 1842 and 1843 patterns, and so one of the big features of volume three is that we present, for the first time, all of Blacker’s pre-1855 dressings in modern language and illustrate all the showier ones.

The above image is Blacker’s 1843 Shannon No. 9, a fabulous pattern that demonstrates to perfection just how far Blacker was ahead of the game in those far off days. He had been tying flies like this since at least the mid 1830s and his astonishing creativity and the incredibly high standards of his tying made him first choice for the leading salmon fishermen of the day, including Sir Hyde Parker, the man who pioneered salmon fishing in Norway. This is a sample shot, just wait until you see the studio shots when the book is published!