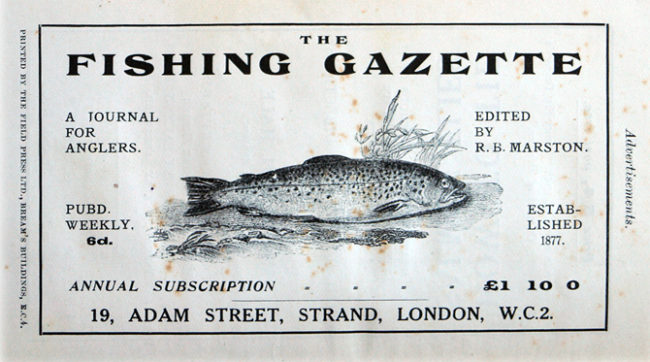 George M. Kelson began his continuing series “On the Description of Salmon Flies” in the spring of 1884 in The Fishing Gazette. The first eighteen patterns he discussed were a series of flies invented by Major John P. Traherne. Kelson’s decision to commence his lengthy series of essays on the salmon fly with Traherne’s patterns would make the powerful impression on the Gazette’s readership that he desired. These eighteen patterns would dazzle his readers, as they had the Salmon in the Shannon and the Tay.

There is a pressing need to preserve and make available magazines like the Fishing Gazette and Land & Water to a wider readership. Many copies of these journals are deteriorating fast, and are held in private collections that have limited access and limited ability to preserve copies for future generations.

ClassicFlyTying.net will now commence to publish plates and relevant descriptions, along with interesting bits of the original articles, in a series on the Fishing Gazette.

A new article will be published weekly, on Monday…