This article is written by Robert Verkerk, the photographs are provided by Michael Johnson and John McLain and are published here with permission. All content is copyrighted. None of this content may be reproduced without prior consent of the author.

A special thanks goes out to Michael Johnson and John McLain, for making this article possible.

I’m sure we’ve all heard of FeathersMc, John McLain’s company in Michigan, where he sells quality materials for the dressing of classic Salmon flies. There used to be a wealth of information on his website. Among this info were the original pattern descriptions of the two Ghost Flies. The pattern descriptions that I am presenting in this article, are hard copies of those original texts.

Have a look at John’s website, if you don’t know it: http://www.feathersmc.com 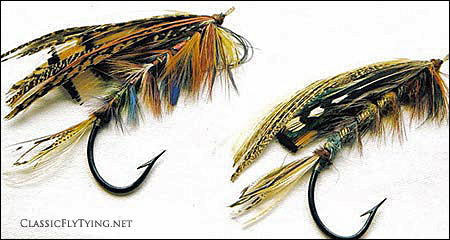 Are These Blacker Flies?

Famed author and fly tier William Blacker is credited with creating two flies that have become known as the “Ghost Flies”. The original article on John McLain’s website specifically posed the question “are these Blacker flies?”, because the patterns were never published. There is a great deal of speculation going around about whether or not they were actually executed by Blacker himself, but regardless of who tied them, these flies appear to be unique productions, prior to their discovery and reproduction by contemporary fly tiers.

A big part of our hobby, for most of us at least, is the interpretation of classic patterns and flies. With the Ghost Flies, the problem we face, is that we only have a few photographs to go by. With thanks to John McLain, I can present the lost photographs to you with this article, along with a few additional photo’s I received from Michael Johnson, the man who initially discovered these flies in 1998.

Michael Johnson says the original Ghost Flies belonged to Neil Freeman, an antique tackle dealer from the UK. Freeman had no idea what they were, and was trying to find out more about them, but probably knew they were special, as he was reluctant to sell. Michael was able to work with both flies for a period of two weeks. He took a number of photographs, and tied a copy of each fly, before returning the originals. Michael’s copies were very exact, but it is easy to tell the originals apart from the copies, because the originals have a shank tip that is bent upward, where the gut loop is secured. 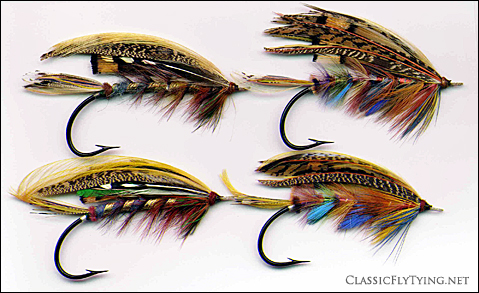 In 2005 Charles Chute had these flies in his posession for about a week, and studied them with a loop and a bodkin. He established the pattern descriptions that we all enjoyed on McLain’s website for so long. Michael Johnson agrees with these descriptions, but says the grey mottled Turkey in the wing of the first Ghost Fly, well hidden underneath the slips og Bustard, was dyed a very light blue. I have taken the liberty to correct this in the pattern descriptions that follow this article.

So are these Blacker flies?

Not being able to study the Ghost Flies personally, we all have to go by the information at hand. Robert Frandsen says the similarities between Ghost Fly Nr.1 and Blacker’s Spirit Fly from 1842/1843 are striking. Frandsen continues to say that the use of Trogon/Quetzal, turns up in a high percentage of William Blacker’s early work, and he hasn’t seen it used anywhere else at that time. Frandsen says he always kept an open mind on the matter, but is reasonably convinced that Blacker may have tied the Ghost Flies, or that someone did a great job copying his style.

In another dialogue, however, Michael Johnson told me that the hooks that both flies were tied on, are an exact match with the 8/0 Wm Bartleet hooks from the plate on the last page of the Salmon Fly by George M. Kelson. The descriptions by Charles Chute speak of O’Shaughnessy. This is a significant bit of information, because the Limerick hooks that are depicted in the Salmon Fly were probably not available before long after William Blacker’s death.

I decided to use Photoshop, to layer the flies over the hook plate from the Salmon Fly, and see what the similarities are. This first image shows a section from the plate. It is important to notice the angle, shape and length of the spear, barb and hook point. 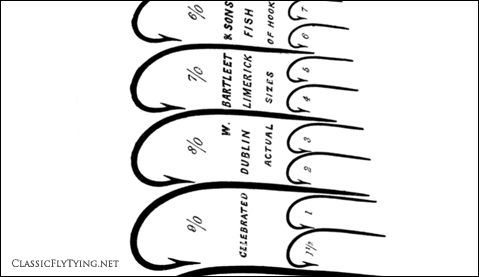 Next, I used Photoshop and a transparancy filter, to see if the flies would fit the blueprint. The similarities between the hook point, barb, spear etc., are spot on. This goes for both flies. 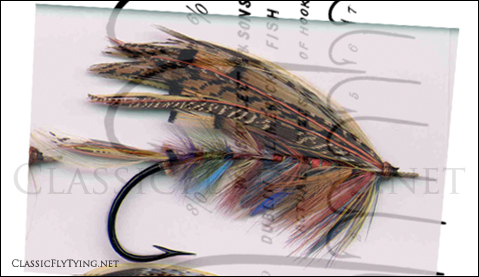 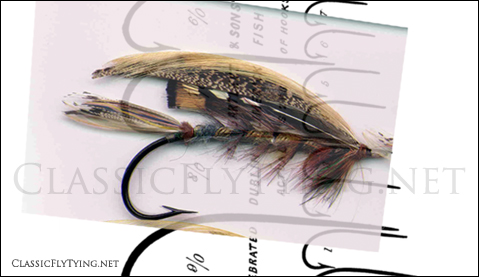 As you can clearly see, this is not a near match, this is an exact match. Both Ghost Flies were tied on Dublin Limerick hooks, the type that appeared in the Salmon Fly, in 1895.

How old are these hooks?

William Blacker died in 1856. The plate with Limerick hooks from the Salmon Fly dates from 1895. Limerick hooks have been around since as early as 1806, but over time, the shape has evolved quite a bit. There is a Limerick hooks plate in Francis Francis’ a Book on Angling from 1867 (page 445), that follow the Philps profile, and they differ quite a bit from the ones that were used for the Ghost Flies.

Another thing that comes to mind, is that William Blacker was known to tie exclusively on blued Philips hooks. If anyone would disagree with that statement, the let me rephrase it a bit. I have yet to meet the first person that can show me an original Blacker fly, that wasn’t tied on a blued Philips hook.

So what to make of all of this?

Even today, contemporary fly dressers are trying to attain to William Blacker’s style. Interpreting his book and if possible, his work, trying to figure out the key to his unique style. All in an attempt to duplicate the quality of his work. While Blacker’s style signature is all over the Ghost Flies, we can’t ignore the fact that Blacker’s book was an instructional manual for others, to learn to tie flies his way.

Will we every know who really tied the Ghost Flies? The answer to that question is irrellevant, because these two flies continue to inspire new generations, the way they have done from the moment they were discovered. It will be an increasingly difficult challenge to gather all required materials, and if and when you succeed to complete the list, the actual tying will put your skills to the test.

The pattern descriptions are listed the Pattern Database in this website…