This is a slightly edited extract from the forthcoming Blacker trilogy, which will be published by the Medlar Press early next year. The printed version will have a couple more illustrations.

Welcome to the Crazy World of Limericks

As part of his crusade to demystify salmon fishing, Ephemera led the way in the attempt to make sense of Phillips’ oddball numbering system by picturing the hook sizes as a numerical series running from no. 1, the largest, down to no. 10, the smallest. This scale was completely unofficial, and no range of hooks was ever sold using its numbering—the sole reason it is known today being its use in The Book of the Salmon. (1) Francis Francis later followed Ephemera’s lead, using the same numbers, but he added in two wildcat hook sizes, with the result that Francis’ smallest hook was a no. 12. (2) The catch is that although these ‘rational’ scales share a common numbering system, the Francis scale is for hooks with a very different bend and his irons become proportionally longer than Phillips after no. 4, this difference being particularly marked for the smaller sizes. The sole advantage of Francis’ scale is that it provides a useful comparison with the nearest Redditch scale hook size on his plate. Given that Francis’ system has little to do with the Phillips scale, and that the Phillips scale does not correspond to the Redditch scale at all well, we can forget both Redditch and Francis for the moment. Many readers will be also be aware of Sir Herbert Maxwell’s illustrations of the Hutchinson ‘rational’ Limerick scale, but this was published more than 40 years after Blacker’s death. Despite the wealth of experience that should have been gained in the interval, the Hutchinson scale proved to be even more eccentric than Phillips’ system, given that it threw in half sizes at intervals. (3) To all intents and purposes the Hutchinson scale is irrelevant to this text, but we include it so that readers are aware of the trap it poses.

Apart from Fitzgibbon’s illustration in The Book of the Salmon, we have a couple of other sources for Phillips Limerick hook sizes, the most valuable of which is Chitty’s The Illustrated Fly-Fisher’s Text Book. Allowing for some minor differences which will be discussed below, Chitty’s figures match the ones taken from Ephemera’s plates very closely, the implication being that Chitty’s measurements of Sells’s and O’Shaughnessy’s hooks are also very likely to be correct. The second of these supplementary sources is Jones’ Guide to Norway, (4) although, as you will appreciate if you have read volume one of this book, as a work of reference the Guide needs to be treated with scepticism. The Guide does, however, have its uses, because the plates of salmon flies for which it is so famous show a couple of patterns dressed on large irons, which is the one place where Chitty fails us. However, there is a caveat, because the plates in the Guide don’t always show the size of hook the dressing calls for, and do not necessarily show genuine Phillips hooks (for an explanation see volume one); to make matters worse, the Flyfishers’ Classic Library reprint of the Guide, which is the most convenient source for measurements, should you not be lucky enough to own an 1848 first edition, has the plates reproduced approximately 5% larger than the originals.

The final source we have for measurements is Phillips hooks themselves, which, in the case of the salmon hook sizes leaves us with a problem, because with a few exceptions, all the hooks we have available to us are in Blacker’s books and they already have salmon flies tied on them. For some reason our idea of stripping the patterns off the hooks so we could measure them was unpopular with Hermann, so another solution had to be found. While there are a couple of tipped-in flies in Hermann’s collection showing partially dressed patterns where much of the hook is bare bar the thread, this still makes precise measurement tricky, so in the end we did the obvious thing and x-rayed several copies of Blacker that had tipped-in patterns— placing a radio-opaque marker in the field let us measure the lengths and bends accurately. 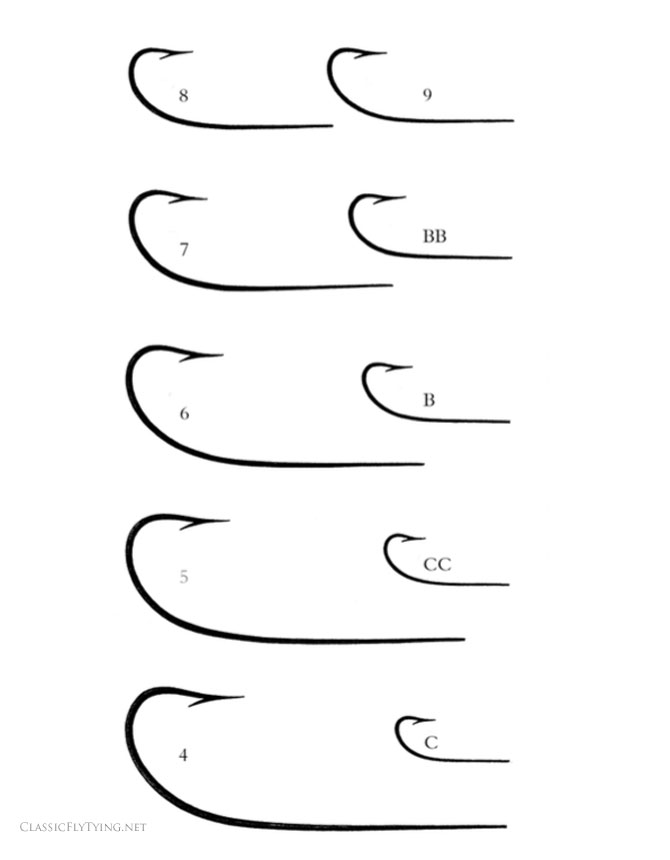 We could continue on this subject endlessly, but bearing in mind that we have to make a start somewhere, Fitzgibbon’s text very helpfully notes that a Phillips No. 9 corresponds to the No. 6 hook on his plate, a statement which allows us to align the two numbering systems and set about making a comparison. Note that there is an error in the list of the Phillips hook sizes given in The Book of the Salmon, ‘CC’ being repeated, giving the impression that the sizes run BB, B, CC and CC (small), whereas in fact, they should read BB, B, CC and C. This can be confirmed by referring to Stoddart (5), Chitty (6) and Blacker. The one caution we would add here is that it is just about possible that Phillips did make some intermediate sizes of hooks from time to time, because a contemporary note in one of the Flyfishers’ Club Blacker copies mentions 9 (small) and 8 (small) hooks and there is also at least one reference in the literature to BBB and CCC Limericks, though not in relation to the Phillips range. (7) Given the cottage industry nature of the Phillips operation, it would have been extremely easy for the company to make wildcat sizes of their irons and taking this and the general variability of handmade hooks into account, our advice is not to get too obsessed about the exact length of Phillips (or any other company’s) irons of this period, and we have gone into the matter in depth here purely for the purpose of providing some kind of historical record.

For the sake of convenience, the table below converts the Ephemera salmon hook sizes taken from the plates in The Book of the Salmon to the Phillips hook scale, with the Chitty measurements included. The table is rendered more complicated by the fact that Chitty neglected to measure any hook larger than a 6 on the Phillips’ scale, which corresponds to a No. 3 on Ephemera’s ‘simplified’ scale, and this omission accounts for the blank cells at the beginning of the Chitty row of entries. You will notice that there is a certain amount of variation between Chitty and Ephemera’s figures, but this is relatively slight and well within the bounds of hand-manufacturing error. An important point is that these hook scales make little sense if they are expressed as metric measurements, because the interval between each hook size was calculated by the maker using fractions of an inch. Converting the hook lengths to millimeters results in all kinds of unexpected problems and we would strongly advise against trying so. If the annotation in the Flyfishers’ Club Blacker copy is correct, then we would expect the Phillips 8 (small) mentioned in it to have measured 19/16 of an inch and the 9 (small) to have been 19/32 of an inch. Given the jump in size between the 9 and the 8, the manufacture of batches of an 8 (small) makes logical sense.

Taking all of the above into account and allowing for the fact that Chitty did not give any sizes for the larger hooks, it would appear that the Ephemera bends and measurements are correct up to No. 6. After that, were it not for a cache of large Phillips irons that Alberto Calzolari discovered, we would enter the realms of guesswork, but it would be logical for a Phillips No. 5 to be 1⁄4 of an inch larger than a No. 4 and for the Phillips No. 4 to be the same amount larger again, as Ephemera’s plate presents them, and this can be confirmed from the hooks in the cache. We are very fortunate that Ephemera thought to include that illustration and that he was so pernickety about getting the measurements right.

The grilse sizes (BB, B, CC and C) also look acceptable on Chitty’s measurements, which has them decreasing by 1/8 of an inch per size. This leaves us with the problem of the small salmon sizes: Phillips No. 9 is 5/16 of an inch larger than the BB and the No. 8 is 5/16 larger again, which means that the No. 7 would fit in nicely were it only 117/16 long, making it 5/16 of an inch larger than the No. 8 and the same amount smaller than the No. 6, but that is not the case. Either John Phillips decided to make his No. 7 only slightly larger than the No. 8, or both Ephemera and Chitty have the wrong measurement and it is hard to say which explanation is correct, other than that the only authenticated Phillips No. 8 that we have been able to measure checked out at 112/16.

For comparison, the Francis sizes are given below, compared to Francis’ suggestions for their Redditch equivalents. The length of both series of hooks is given, the Francis lengths being taken from his plate and the Redditch lengths from an early Hardy hook scale. As you can see, Francis’ hooks match neither Fitzgibbon’s, Chitty’s, nor the Hardy scale particularly well, and the Hardy scale has its share of problems anyway, but if you are wary of venturing into the scary world of custom salmon hooks and are planning to use later Redditch Limericks, these tables should allow you to pick a reasonably good match in most cases. As an example, a Phillips No. 9 measures 1 3/8, which puts it midway between either a Francis scale 8 and 9, or a Redditch 1 and 2. This is why we have not included a conversion scale from Phillips to Redditch—the two scales don’t match up well enough for it to work.

So as far as shape goes, there is no reason to look any further than the plate in The Book of the Salmon, which shows the curve of the Phillips hook series to such perfection that it is possible to blueprint hooks off the plate, as long as you bear in mind the issues described above and know the thickness of wire used. Pay particular note to the extremely distinctive hollow points on the hook and the ever changing curvature of the bend, which extends rather further into the shank than is usually the case with modern Limericks. Although the bend in the shank triggered some criticism, these were among the most graceful hooks ever made, and every single one that we have seen with a Blacker pattern tied on it is a very dark blue colour, almost black. This was achieved by a type of blueing process, because no Phillips hook from Blacker’s era was ever japanned.

If you don’t want to ascend the slippery slope of the steep learning curve of making a set of Phillips hooks yourself, you can do no better than to check out Ronn Lucas’s site at http://ronnlucassr.xyz/ — Ronn is a valued member of the Blacker team and has developed a complete set of reproduction Phillips salmon hooks, running from 4 all the way down to C. We have tied the best part of 300 flies on them, so we know them well enough to know we like ‘em a lot.